Are you sure about this data destruction method?

Do you think you have destoyed the data by simply “deleting” or “formatting” it? ”
Deleting” is not a way to sanitize the data.
Even if you delete the data, it still remains. It may also be well known that “formatting” (resetting to factory settings) may also leave some data behind.

However, according to the “Guidelines for Media Sanitization SP 800-88 Rev.1” by the National Institute of Standards and Technology (NIST), a reformatting called “clear”, which will be explained later, is allowed on some devices, such as ordinary mobile phones, as long as the data cannot be easily restored using the device interface available to the user. 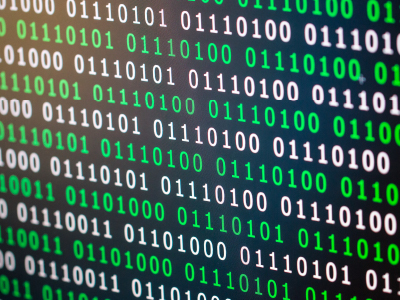 Is it really safe to destroy the data by "overwriting"?

“Overwriting,” which complies with the U.S. Department of Defense standard (DoD 5220.22-M), has been the standard data sanitization method for a long time. Therefore, many people may still recognize this as an absolute data sanitization method. However, NIST SP 800-88, which was introduced in 2006 (revised in 2014 and currently SP 800-88 Rev.1), is now the global standard for data sanitization. For example, when the DoD method was the standard, SSDs did not exist. NIST SP 800-88 Rev.1 states that from a sanitization perspective, the evolution of SSD storage technology (over-provisioning*1 and wear-leveling*2) has been revolutionary, making it impossible to erase all the data by overwriting. 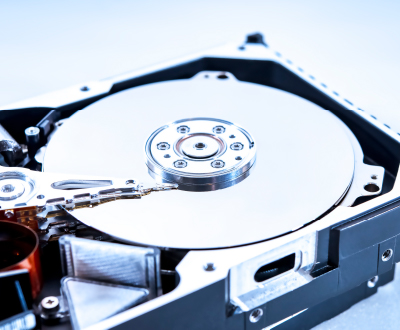 "Degaussing" will not work for SSDs! And it may not also work on HDDs.

Is it true that "physical destruction" is the ultimate data sanitization method?

“Destroy” literally destroys the storage media by shredding, disintegrating, pulverizing, incineration, etc., to a level where the data cannot be recovered even with the state of the art laboratory techniques. In the appendix at the end of NIST SP800-88 Rev.1, there is a list of recommended data sanitization methods for different types of storage media, including “Clear,” “Purge,” and “Destroy.” Among the three, “Destroy” is the only one that can be used for all types of storage media.

Also, "Destroy" takes less time to verify since you can visually confirm that it has been executed.

So, are there any flaws in “Destroy”? Of course, there are some things you should pay attention to. “Destroy” does not directly erase data.

Thus, half-baked physical destruction can lead to data recovery using state of the art laboratory techniques.
NIST SP800-88 Rev.1 specifically states that bending, cutting, or some emergency procedures (e.g., using a firearm to puncture a storage device) may only damage the device partially and leave some parts intact, making the information accessible using state of the art laboratory techniques. Such methods are not recognized as “Destroy.”

In addition, the NIST SP800-88 Rev.1 is concerned that flash memory such as SSDs may be difficult to physically destroy because they are so small and hard. In general, “disintegration,” “pulverization,” and “incineration” are performed by outsourced metal destruction companies with specific capabilities or by licensed incinerator. As for “shredding,” for example, if you remove the outer cover of a floppy disk, you can process the disk with a paper shredder. So, “Destroy” is not something that can be easily implemented.

Nevertheless, even if you look at the Sanitization and Disposition Decision Flow (NIST SP800-88 Rev.1) below, you can see that for moderate and high-security storage media, in which you have no plan on reusing, there is only one option, “Destroy.” 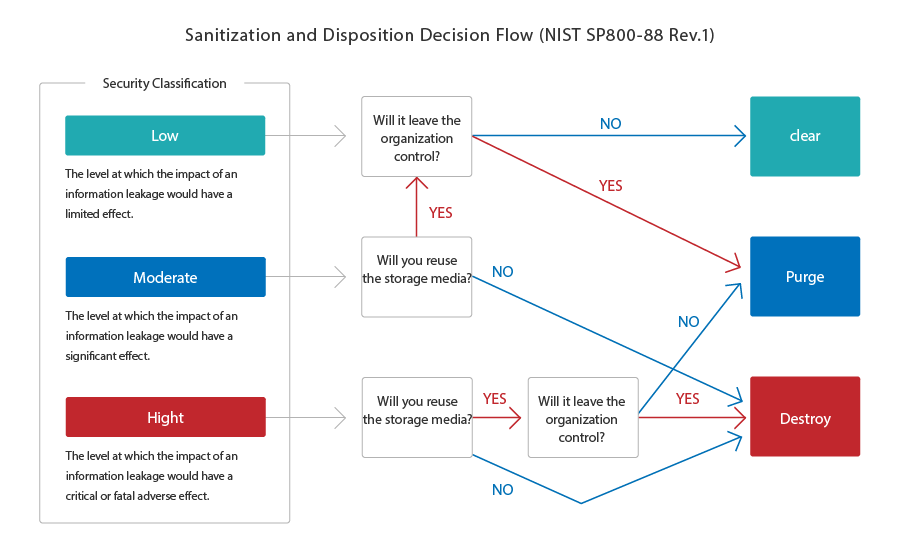 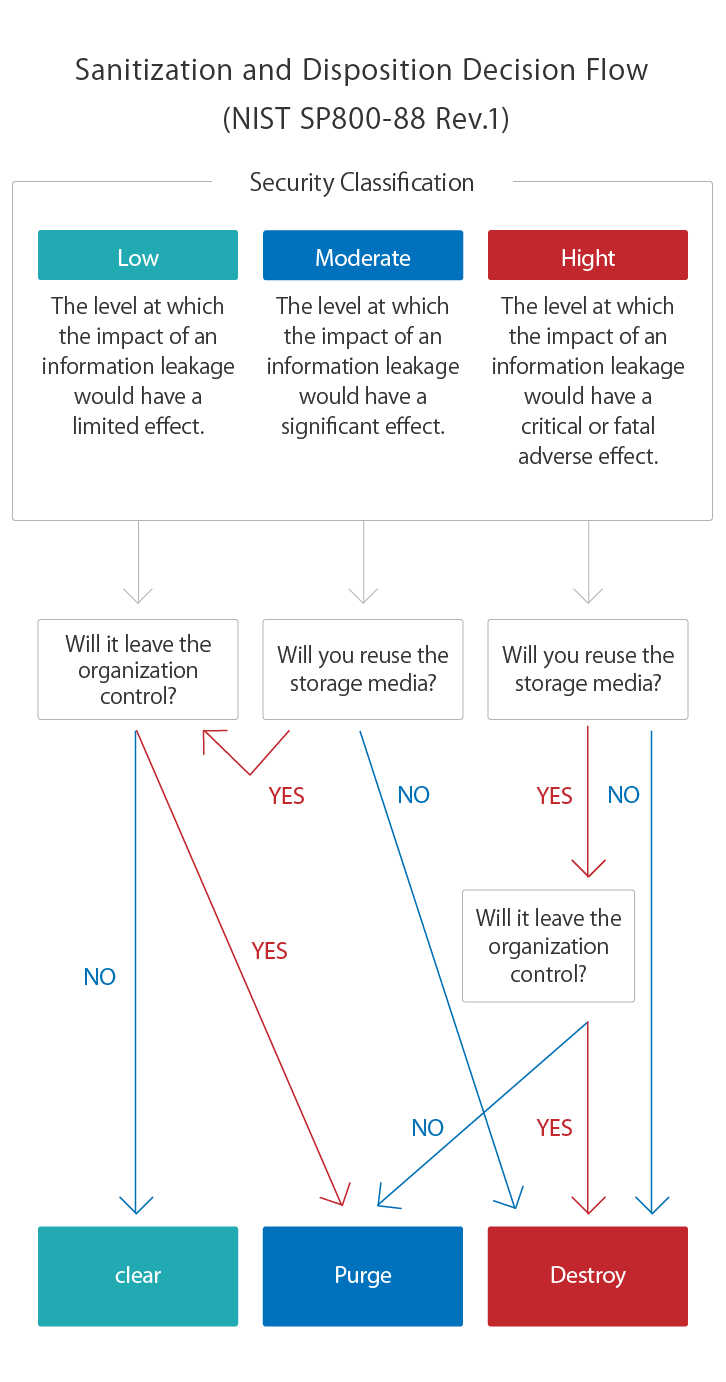 When comparing "Clear," "Purge," and "Destroy" as shown below, "Destroy" seems to be more versatile unless you are reusing the storage media.

However, is there such a device that can solve these concerns with physical destruction? (1) Does not bend, cut, or puncture. (2) Easy to use even without any specific capabilities (3) Can shred data into small pieces in proportion to its confidentiality.

A "sand making machine" that can instantly crush hard ores into the desired size. The multimedia shredder Mighty Security was developed from the inherited strength of that sand making machine. That is why it can physically destroy hard storage media into pieces according to the confidentiality of the data. A general media shredder is a derivative of a paper shredder, so it can only handle a portion of soft storage media. Mighty Security can handle all types of storage media with one machine so, you don't have to worry about data sanitization anymore.

Extensive records of implementation in various industries, especially in the central government agencies

In recent years, we have seen an increase in the use of this service, especially by data destruction companies.

VOICE The plant engineer who implemented the system evaluated it as follows.

The software eliminates the risk of information leaks by simultaneously reading and collating the serial numbers of storage media to be processed for data destruction and can easily generate a certificate from the collated data.
Operating system requirements

Helping you recycle your crushed products

Storage media physically destroyed by Mighty Security may contain valuable metals, which are valuable urban mining resources. We often get the question, “When crushed into pieces, this can’t be recycled anymore, right?” But that’s not the case. If you are having trouble disposing of your waste, please contact us, and we will be happy to help you reduce your waste, which is a part of the SDGs. 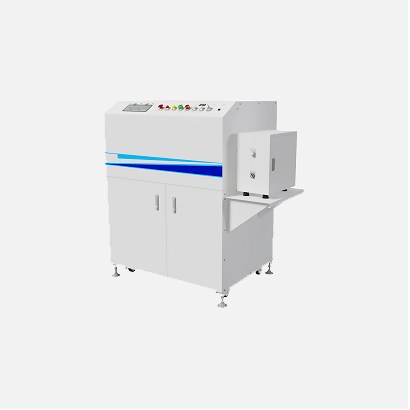 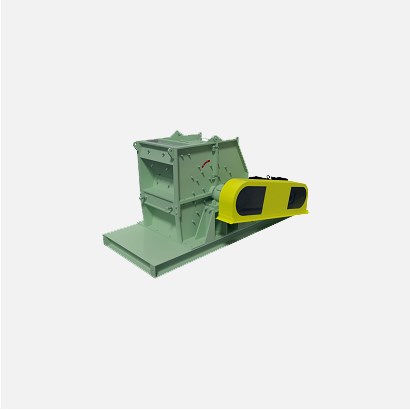